Alonissos is the easternmost of the Sporades island complex, in the northwest Aegean, and the greenest of the four. The island is a guarantee for relaxing holidays in nature and by the sea.
The island of Alonissos is a lush paradise, with many beautiful beaches and coves as well as hikes with impressive views. The island is also famous for its national marine park, a nature reserve for many terrestrial and marine species such as the Mediterranean monk seal (monachus monachus). 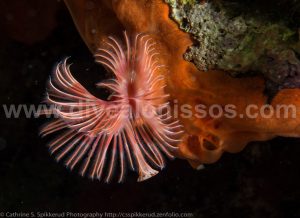 Two morning dives. Our first dive at Blue Cave – North is a beautiful dive with multiple large rocks teaming with life to swim around and between with optional sea grass routes slightly further from the coast.  Ending by following the wall back around and into the cave again.  Vertical wall with many colors and excellent visibility.  Abundant number of large fish.

Second dive of the day at Blue Cave – South with a lovely drop off down to about 25 meters followed by a very nice wall dive and back over rocks with plenty of sea life.
Finishing the dive off we head back in the cave itself with beautiful blue colors in the water and a couple of little caves to take a look in. Interchangeable landscape of seaweed and rocks. Visibility very good with a variety of sea life. 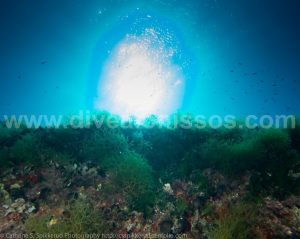 Two morning dives at Xera Mourtias . A stone reef in the middle of the bay is home to two of our dives.
The Northern one is an awesome drop off from about 10 meters down to 33 meters (although we don’t need to hit the bottom!) which we then follow the huge wall around to a large bed of sea grass then backup on top of the reef to check out for crabs and nudibranchs on the return trip. 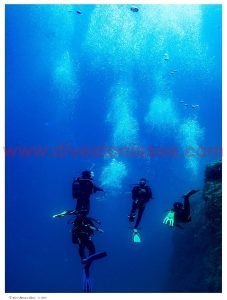 For our second dive we start the dive with the same impressive drop off as the North side however this time we head South toward the sea end of the reef. A larger wall dive than the North that has old fishing nets caught along it which makes for quite a picturesque dive with schools of Sea Bream and Damselfish that like to come over the top and down the wall to see what the divers are up to. 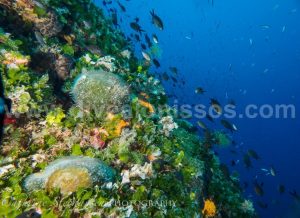 For our first dive we will visit Agios Petros. A lovely little dive off the East coast of Alonissos, a little wall that goes down to a sandy bottom which is home to many flounders and the odd octopus too. This is followed by a range of stone pillars and rocks to hunt around for all the fun stuff! It has a couple of options on it depending on the level of diver as to whether you take the swim between mainland and island on the route back to the boat or head back along usually with the current for a nice lazy drift back to the boat. 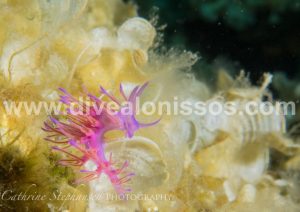 Second dive at Nudi Rock. Named after the number of Nudibranchs that we find here! This is a lovely little dive site which includes wall diving, swimming between slots and over rocks so there can be quite a variety of things to see – especially lots of flambellinas. A must dive site for the micro life lovers.

First dive of the day to our resident wreck of an old immigration boat that sunk off the coast of the Two Brothers around 15 years ago.  We follow a sandy channel and a wander through seaweed down to about 22 meters where the beautiful wooden shipwreck appears out of the blue on your left hand side – we have an explore around (reaching depths of 30 meters) then head back up to the coastline where we finish the dive investigating some of the strewn wreckage and seeing if we can spot octopus!

Second dive at Two Brothers – South ! Our largest and probably most impressive wall dive in the area, the dive starts off going through a shallow swim through between mainland and the small islet that is home to the wall dive itself.  Due to this site dropping off so fast we often get larger scale fish that we see elsewhere especially scorpion fish. An impressive wall with a lot of sea life, colors and a passage through an underwater ravine which makes this experience unforgettable. 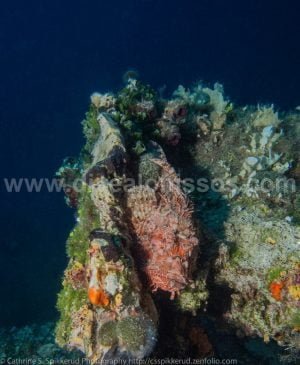 A very nice deeper dive at Agios Giorgos – North, where we probably see more things that are not seen elsewhere around the marine park.  A reasonably long wall dive out to some dramatic big open spaces scattered with rocks and pillars, often get the larger morays out here and even a Spanish dancer of two.  A beautiful underwater outcropping with rich sea life. 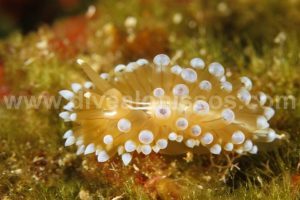 Second dive to an another lovely wall with some old fishing nets caught along it, that adds another dimension to the site which leads you up over some sea grass and round to the coastline which you follow back through and over boulders to the cove which is often home to some pretty nice schools of fish. 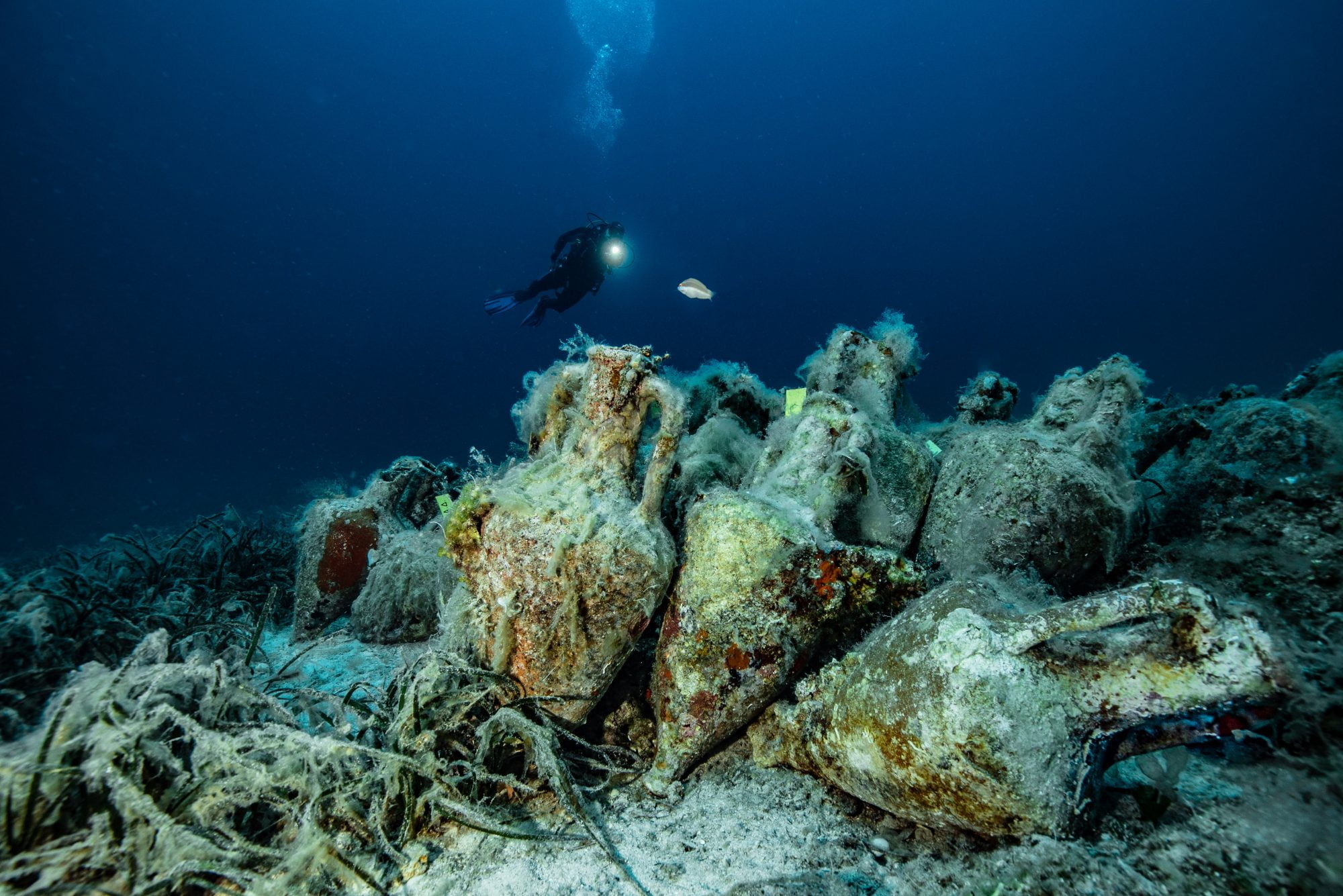 A breathtaking dive at the ancient shipwreck of  Peristera, which was discovered in the early 1990s will be the first one that the Greek government opens to the public for the 2020 summer between Aug. 3 and Oct. 2.
The exposed parts of the wooden Peristera wreck have long rotted away, but the remaining cargo present a fascinating seascape for divers. The ship, which archaeologists believe was a large Athenian barge carrying amphora’s filled with wine, likely sank toward the end of the fifth century B.C. The wreckage now sits about 30 meters underwater, and historians say it’s the largest ship of its kind discovered under the sea.
Divers will encounter a vast vista of an estimated 4,000 amphora that sometimes are piled high above their heads as they swim around the wreckage. Many of the vessels — curvy with small circular handles near the top — are intact and have become home to sea sponges and fish that add unexpected color to the monochromatic pottery.

While the shipwreck is visually stunning, it also holds considerable historical significance. The Peristera shipwreck changed historians’ understanding of shipbuilding in the ancient world. Archaeologists originally thought that this type of shipbuilding originated with the Romans. The Peristera wreck proved that the Greeks were ahead of the Romans.
Prior to the discovery of the wreck, archaeologists believed that the largest ships were designed and constructed by the Romans around the first century B.C. These ships carried around 1,500 amphora’s and weighed up to 70 tons. The Greek ship was built about four centuries earlier, weighed 126 tons, and carried more than twice the amount of amphora’s.
Archaeologists still have much to learn from the Peristera site, as a lot of it has not yet been excavated. Historians have not yet figured out what caused the wreck or whether other treasure might lie below the thousands of amphora’s. While some clues point to a fire on board, experts are not sure whether that caused the ship’s demise. 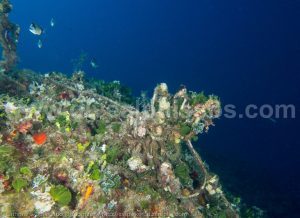 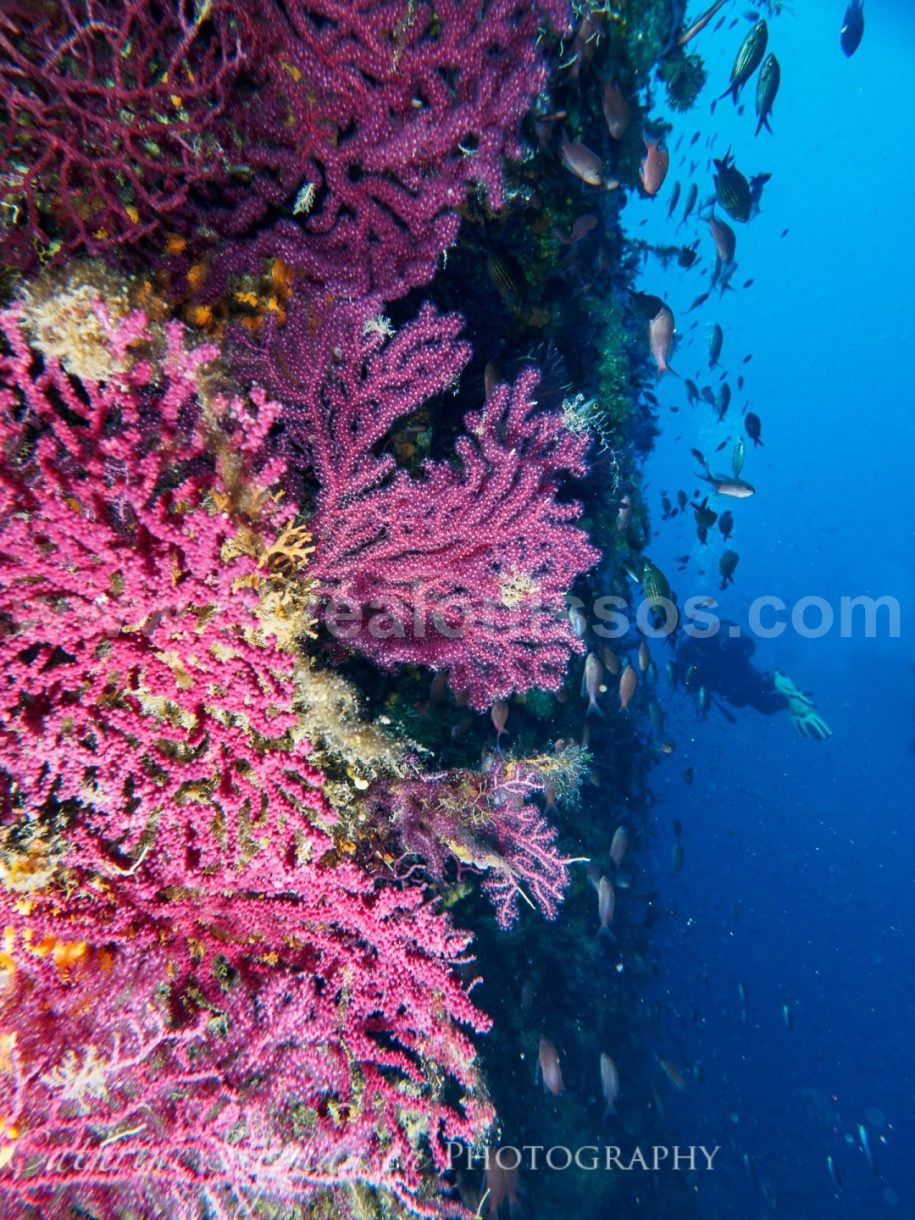 A real site to behold!  Between 35 – 40 m a stunning garden of colorful Gorgonians will leave you breathless!  We have discovered 2 different gardens – both equally beautiful.  As these gardens grow where there is a strong current – only advanced experienced divers can dive here. A must see for all avid lovers of the deep! You must be an  Advanced Open Water + deep diver to be able to dive to this site.