The paper suggests the mechanism was likely designed by Archimedes

Archaeologists claim to have solved the mysteries behind an ancient Greek “computer” that shouldn’t even exist. Known for its hidden relics archaeological treasures, Greece has offered great insights into a world long lost.

A group of scientists from the University of London College presents a new explanation for the gearing on the front of the mechanism, where the evidence had been thus far unresolved. As their paper claims, they now have an even better appreciation for the sophistication of the device—an understanding that challenges many of the preconceptions about the technological capabilities of the ancient Greeks.

Some of the earliest advances in understanding space and the position of Earth around the sun were made in ancient Greece. The very first astronomical calculator was also built in ancient Greece. This “computer” has continued to fascinate scientists and archaeologists alike. 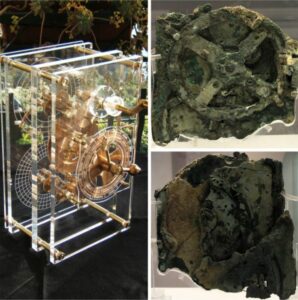 Known as the Antikythera Mechanism, the 2,000-year-old Greek hand-powered orrery is a mechanical model of the solar system. It’s also considered the world’s oldest analogue computer.

Using the Antikythera, Greek scientists used to track eclipses and astronomical positions. In addition, they used to trace the cycle of the Olympic Games.

The Antikythera Mechanism was first found in ruins of a shipwreck in 1901 off the coast of the Greek island Antikythera (hence its name). A year later, it was identified as carrying gear by Greek archaeologist Valerios Stais.

At first sight, the Antikythera Mechanism appeared as a hunk of corroded metal that “no one knew quite what to do with.”

Professor Tony Freeth of the University College London said that “it was not recognised at all as being anything interesting when it was discovered, it was just a corroded lump about the size of a large dictionary.” 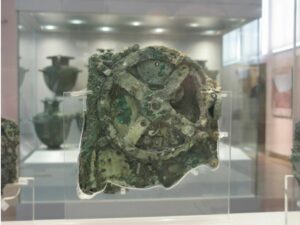 In the history of astronomical observations, the first recorded specimen of an instrument that can be considered similar to the Antikythera Mechanism appears centuries later, in 600 AD, in Byzantium. And the first astronomical clocks are even later, as they began to be made from the 14th century onwards.

As one of the members of the group which presented the paper on the mechanism in March, Adam Wojcik writes in the scientificamerican:

In March 2021 my group at University College London, known as the UCL Antikythera Research Team, published a new analysis of the machine. The team includes me (mathematician and filmmaker) Adam Wojcik (a materials scientist); Lindsay MacDonald (an imaging scientist); Myrto Georgakopoulou (an archaeometallurgist); and two graduate students, David Higgon (a horologist) and Aris Dacanalis (a physicist). Our paper posits a new explanation for the gearing on the front of the mechanism, where the evidence had previously been unresolved. We now have an even better appreciation for the sophistication of the device—an understanding that challenges many of our preconceptions about the technological capabilities of the ancient Greeks.

ANCIENT ASTRONOMY
We know the Greeks of that era were accomplished naked-eye astronomers. They viewed the night sky from a geocentric perspective—every night, as Earth turned on its axis, they saw the dome of stars rotating. The stars’ relative positions remained unchanged, so the Greeks called them the “fixed stars.” These early astronomers also saw bodies moving against the background of stars: the moon goes through a rotation against the stars every 27.3 days; the sun takes a year.

The other moving bodies are the planets, named “wanderers” by the Greeks because of their erratic motions. They were the deepest problem for astronomy at the time. Scientists wondered what they were and noticed that sometimes the wanderers move in the same direction as the sun—in “prograde” motion—then come to a stop and reverse direction to move in “retrograde.” After a while they reach another stationary point and resume prograde motion again. These rotations are called the synodic cycles of the planets—their cycles relative to the sun. The seemingly strange reversals happen because, as we know now, the planets orbit the sun—not, as the ancient Greeks believed, Earth. 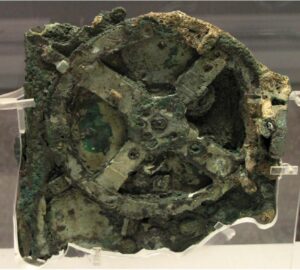 In modern terms, all the moving astronomical bodies have orbits close to the plane of Earth’s motion around the sun—the so-called ecliptic—meaning that they all follow much the same path through the stars. Predicting the positions of the planets along the ecliptic was very difficult for early astronomers. This task, it turns out, was one of the primary functions of the Antikythera mechanism. Another function was to track the positions of the sun and moon, which also have variable motions against the stars.

A key figure in the history of Antikythera research was British physicist turned historian of science Derek J. de Solla Price. In 1974, after 20 years of research, he published an important paper, “Gears from the Greeks.” It referred to remarkable quotations by Roman lawyer, orator and politician Cicero (106–43 B.C.E.). One of these described a machine made by mathematician and inventor Archimedes (circa 287–212 B.C.E.) “on which were delineated the motions of the sun and moon and of those five stars which are called wanderers … (the five planets) … Archimedes … had thought out a way to represent accurately by a single device for turning the globe those various and divergent movements with their different rates of speed.” This machine sounds just like the Antikythera mechanism. The passage suggests that Archimedes, although he lived before we believe the device was built, might have founded the tradition that led to the Antikythera mechanism. It may well be that the Antikythera mechanism was based on a design by Archimedes. 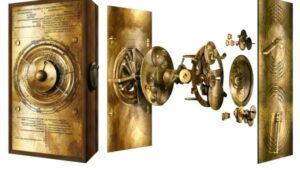