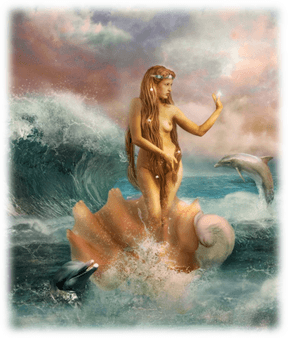 APHRODITE (Aphroditê), one of the great Olympian divinities, was, according to the popular and poetical notions of the Hellenes, the goddess of love and beauty. She was depicted as a beautiful woman usually accompanied by the winged godling Eros (Love). Traditions stated that she had sprung from the foam of the sea, which had gathered around the damaged pa

According to Hesiod and the Homeric hymn on Aprts of Uranus, that had been thrown into the sea by Kronos after he had unmanned his father. Aphrodite, the goddess, after rising from the foam first approached the island of Cythera, and then went to Cyprus, and as she was walking on the sea-coast, flowers sprang up under her feet, and Eros and Himeros accompanied her to the assembly of the other great gods, all of whom were struck with admiration and love when she appeared, and her surpassing beauty made every one desire to have her for his wife.

According to the cosmogonic views of the nature of Aphrodite, she was the personification of the reproductive powers of nature, and the mother of all living beings. A trace of this notion seems to be contained in the tradition that in the contest of Typhon with the gods, Aphrodite transformed herself into a fish, which was considered to possess the greatest reproductive powers.