Hellas at a glance

Hellas is located in south-eastern Europe on the southern tip of the Balkan Peninsula, bordering Turkey to the east; Albania, Bulgaria and the Former Yugoslav Republic of Macedonia (FYROM) to the north; and surrounded by the Ionian and the Aegean seas. 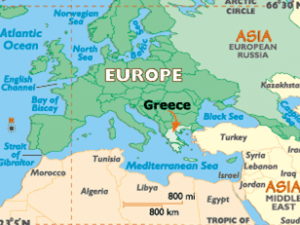 Some 80% of the mainland is mountainous with ranges extending into the sea as peninsulas or chains of islands, while 20% of the total land area of Hellas consists of more than 3,000 islands along its coast that range from very small islands to Crete which is the fifth largest Mediterranean island. Other large islands in Hellas are: Evia, Khios, Lesvos, Rodos, Kefallonia, Corfu, Limnos, Samos and Naxos. Most islands lie in the Aegean Sea and are divided in seven groups -from north to south-, (Source: Hellenic National Tourism Organisation)

Hellas is an easy place to travel around thanks to a comprehensive public transport system.

To most visitors, travelling in Hellas means island-hopping on the multitude of ferries that crisscross the Ionian and the Aegean.

Hellas also has an extensive domestic air network that consists of 67 airports.

Buses are the mainstay of land transport, with a network that reaches out to the smallest villages. Trains are also a good alternative, where available.

According to the Hellenic Republic Ministry of Economy and Finance, the total population in Hellas was last recorded at 11.3 million people in 2012.

The official religion of Hellas is Hellenic Orthodox Christianity, which accounts for approximately 98% of the population.

The official language is Hellenic (Ellinika) with 98% of the population speaking and writing it. However, Hellenic people are multilingual and so English, French and German are also widely understood and spoken, especially from young people.

The climate in Hellas is typical of the Mediterranean climate: mild and rainy winters,

throughout most of the year. In climatological terms, the year can be broadly subdivided into two main seasons: The cold and rainy period lasting from mid-October until the end of March, and the warm and dry season lasting from April until September.

ahead of Greenwich Mean Time (GMT+2).