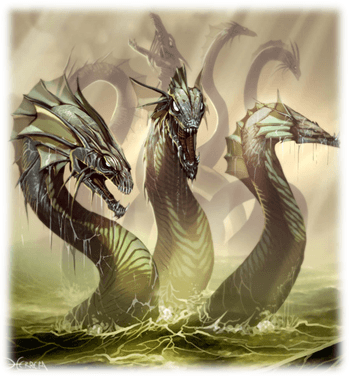 In Hellenic mythology, the Lernaean Hydra was an ancient serpent-like chthonic water beast, with the body of a dragon/snake,  many heads (possibly 7, 8 or 9), two arms & legs with knife-like claws, sharp spines/spikes & a long serpent tail. According to the myth  if anyone tried to cut off any of her heads , two more would grow in its place. She had poisonous breath and blood so toxic even its tracks were deadly.  She lived in the lake of Lerna in the Argolid and from its murky swamps, the monstrous serpent would rise and terrorize the city. There, beneath the waters was an entrance to the Underworld and Hydra was its guardian.

She was finally killed by Hercules as the second of his Twelve Labours.  He managed to do so, with the assistance of his faithful servant Iolaus, by burning away the heads of Hydra to avoid the regeneration of new ones, and burying the ninth or immortal one, under a huge rock. Hercules would later use arrows dipped in Hydra’s poisonous blood to kill other foes during his remaining Labours.