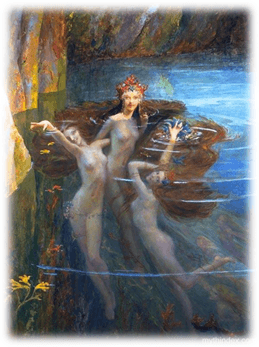 THE NEREIDES (or Nereids) were fifty Nymphs or goddesses of the sea. They were the patrons of sailors and fishermen, who came to the aid of men in distress, and goddesses who had in their care the sea’s rich bounty. Individually they also represented various surfaces of the sea, from salty brine, to foam, sand, rocky shores, waves and currents, in addition to the various skills possessed by seamen. The Nereides lived with their elderly father Nereus in a silvery cavern at the bottom of the A

The Nereid Thetis was their unofficial leader, and Amphitrite was the queen of the sea and future wife of Poseidon. Together with the Tritones they formed the followers of Poseidon in the Aegean Sea.

The Nereides were depicted in ancient art as beautiful young maidens, sometimes running with small dolphins or fish in their hands, or else riding on the back of dolphins, hippokampoi (fish-tailed horses) and other sea creatures.