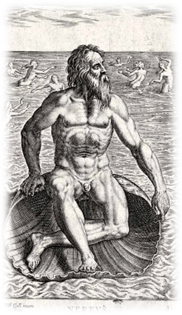 NEREUS is described as the wise old man of the sea, and the god of the sea’s rich bounty of fish. He was a gentle, well-intentioned old man who was just and would tell nothing but the truth .  His empire is the Mediterranean or more particularly the Aegean sea, where he lived  with his wife Doris and fifty Nereid daughters.

Like many of the other sea-gods Nereus was a master shapeshifter, and spoke with prophetic voice. He was believed, like other marine divinities, to have the power of prophesying the future and of appearing to mortals in different shapes, According to the legend, Nereus foretold the fall of Troy to Paris. One of his daughters Amphitrite was later married to Poseidon.