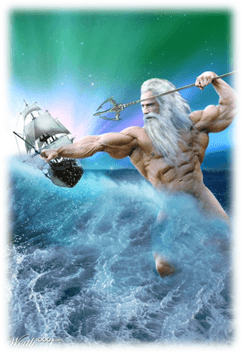 POSEIDON was the great Olympian god of the sea, rivers, flood and drought, earthquakes, and horses. He was depicted as a mature man of sturdy build with a beard, and holding a trident. Poseidon was the god of the Mediterranean sea. His name seems to be connected with potos, pontos and potamos, according to which he is the god of the fluid element.

He was a son of Cronos and Rhea. He was accordingly a brother of Zeus, Hades, Hera, Hestia and Demeter, and it was determined by lot that he should rule over the sea. Like his brothers and sisters, he was, after his birth, swallowed by his father Cronos, but thrown up again.

The palace of Poseidon was in the depth of the sea near Aegae in Euboea, where he kept his horses with brazen hoofs and golden manes. With these horses he rides in a chariot over the waves of the sea, which become smooth as he approaches, and the monsters of the deep recognize him and play around his chariot.

Being the ruler of the sea (the Mediterranean), he is described as gathering clouds and calling forth storms, but at the same he has it in his power to grant a successful voyage and save those who are in danger, and all other marine divinities are subject to him. As the sea surrounds and holds the earth, he himself is described as the god who holds the earth, and who has it in his power to shake the earth

The symbol of Poseidon’s power was the trident, or a spear with three points, with which he used to shatter rocks, to call forth or subdue storms, to shake the earth, and the like.

In the legends about this divinity there are many in which he is said to have disputed the possession of certain countries with other gods. Thus, when Poseidon and Athena disputed as to which of them should give the name to the capital of Attica (Athens), the gods decided, that it should receive its name from him who should give upon man the most useful gift. Poseidon created the horse, and Athena called forth the olive tree, won the dispute and named the capital after her: Athena or Athens. Poseidon, outraged at this, caused flood to the country.

Numerous other legends include: In conjunction with Zeus he fought against Cronos and the Titans, and in the contest with the Giants he pursued Polybotes across the sea as far as Cos, and there killed him by throwing the island upon him. He further crushed the Centaurs when they were pursued by Heracles, under a mountain in Leucosia, the island of the Seirens.

He pursued together with Zeus, for the hand of Thetis, but he withdrew when Themis prophesied that the son of Thetis would be greater than his father. When Ares had been caught in the wonderful net by Hephaestus, the latter set him free at the request of Poseidon, but Poseidon afterwards brought a charge against Ares before the Areiopagus, for having killed his son Halirrhothius.

At the request of Minos, king of Crete, Poseidon caused a bull to rise from the sea, which the king promised to sacrifice; but when Minos unfaithfully hid the animal among a herd of oxen, the god punished Minos by causing his daughter Pasiphaë to fall in love with the bull. Poseidon was married to Amphitrite, by whom he had three children, Triton, Rhode, and Benthesicyme; but he had besides a vast number of children by other divinities and mortal women.