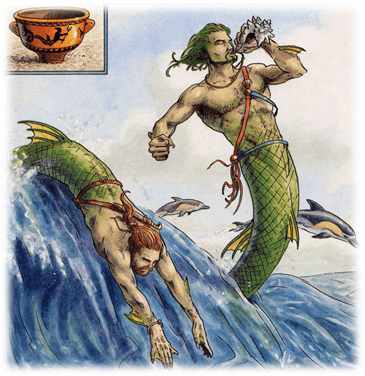 TRITON was a fish-tailed sea god, the son and herald of Poseidon, king of the seas, who lived with his father and mother in a golden palace on the bottom of the sea. He was the father of Pallas and foster parent to the goddess Athena at the same time.When the gods wanted a message to be delivered, Hermes with his flying sandals was the unchallengeable choice. However Hermes hardly ever went bellow the waves of the sea. When it came to the realm of the sea none could rise above Triton, because Triton is the messenger god of the sea. He had the upper body of a man and the tale of a fish and carries a golden trident.

His chief characteristic is a trumpet consisting of a shell , which he blow at the command of Poseidon, to soothe the restless waves of the sea, According to the myth, its sound was so horrible, that when loudly blown, everyone thought it was some wild beast and fled in horror. He was also feared because it is said that he has the ability to multiply into a swarm of Tritones, daemons of the sea. In the fight of the Gigantes this trumpet served to frighten the enemies.  Triton was also described as the god of the giant, Libyan, salt-lake Tritonis. When the Argonauts were stranded in the desert he assisted them in finding passage from the lake back to the sea. Later writers describe this divinity of the Mediterranean as riding over the sea on horses or other sea-monsters.