Wreck Diving in Greece: Top 10 Wrecks you should Dive

Wreck Diving in Greece: Top 10 Wrecks you should Dive

Diving in Greece can satisfy even the most experienced of divers. Most diving destinations around the world offer an opportunity to explore marine nature. In Greece, diving also offers a look into modern history.

From the Gulf of Evia to the Saronic Gulf, both close to Athens, and the Ionian Sea in western Greece, to the Cyclades in the Aegean Sea, Greece’s seabed is a vast museum of modern wrecks. Offering more than just rusted metal sheets, each wreck carries its own unique history.

Fighter planes that once tore through the skies, World War II naval submarines and destroyers that engaged in major battles, cargo and passenger ships that sailed the seas, lie sunken and preserved in good condition following their inglorious ends. Plunging into the waters and counting the meters is like counting the decades backwards until you reach these sunken ships and planes.

Kostas Thoktaridis, a diver and explorer of naval history, estimates that the number of contemporary-era wrecks in Greece amount to roughly 1,500. Of these, some 500 may be explored and attract divers, from beginners to advanced, from all over the world. If this is your sport, get your wet suit, mask, and flippers ready and fill your tanks with oxygen, or visit one of the many certified diving centers operating in Greece for an introduction, with the help of experienced instructors, into the magic of wreck diving. Even during the winter months, the weather is usually appropriate, the waters are clear, and the water temperature is pleasant.

In Greece, recreational diving began back in the 50s. However, the first Greek divers were already active a century earlier, without oxygen tanks. They were the sponge divers of the Dodecanese, from Symi and Kalymnos.

Below are listed,  10 top Wrecks you should Dive. Take your pick. 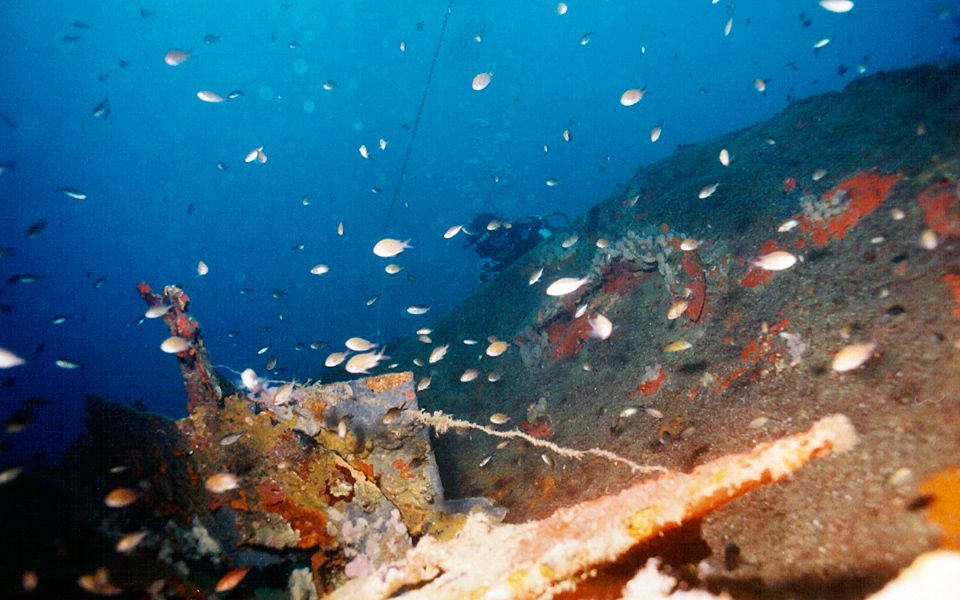 The “pride of the Greek fleet”, as Queen Olga was considered, lies sunken at the island of Leros

The legendary World War II destroyer, Queen Olga, was built in Glasgow and played an active role in hundreds of military campaigns, from the Adriatic Sea to the Indian Ocean. When the Greek-Italian war was declared during World War II, Queen Olga was considered the Greek fleet’s most sophisticated warship. Its bombardment by Nazi German fighter planes on September 26, 1943 took the lives of the ship’s captain and 72 crew members on board. Divers may see the holes in the funnels caused by the attack. The degree of visibility is medium (5-10 meters) as the shipwreck is located at the port. 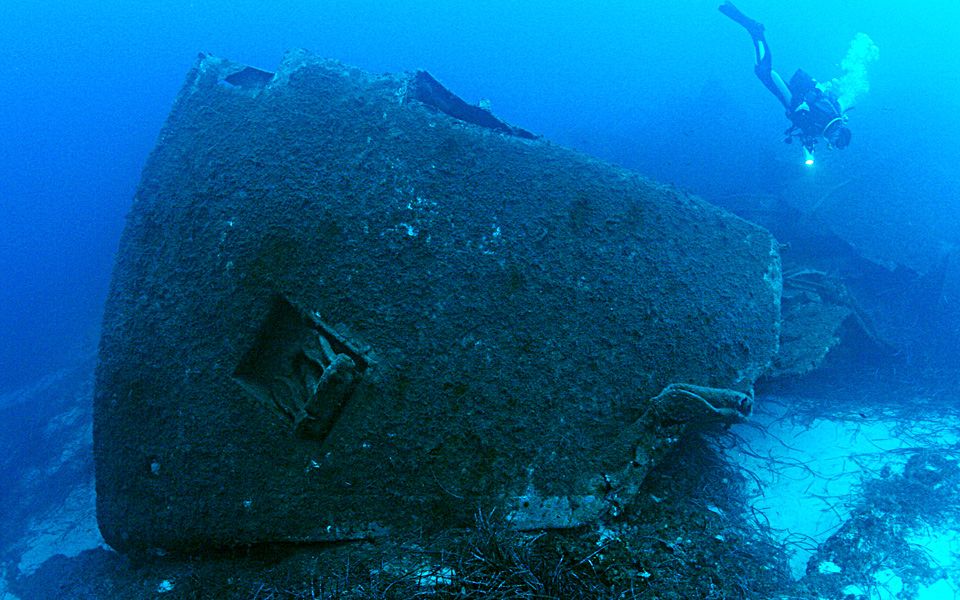 It was renowned as the toughest passenger ship that was able to cope under demanding conditions. A difficult dive. For experienced divers only.

Panormitis lies sunken at a depth of 32 meters, northwest of the peripheral island of Telendos, close to Kalymnos, 100 meters away from the uninhabited rocky islet of Epano. Despite its small size (33.5 meters long and 6.7 meters wide), this passenger ship, constructed in Oslo, Norway, was equipped with 322 cabins and could board 374 passengers.

In 1958, it was sold by a Norwegian shipping company to Greek ship owners and, two years later, began servicing a challenging route connecting the remote Dodecanese islands. A legendary voyage made in 1962 amid gale winds measuring 11 Beaufort, from Rhodes to Kastelorizo, in order to transport a sick woman for medical treatment, is still remembered by some.

The ship’s entire crew had received an honorary award from the Athens Academy in recognition of the bravery displayed during this effort. However, the vessel was to experience an inglorious finale.

In 1966, while sailing from Leros to Kalymnos, it struck a rock islet. All on board were rescued thanks to the lifeboats and emergency help provided by locals from both islands. The vessel now rests slanted to its right side over the sandy seabed and has drawn a multitude of marine organisms, transforming it into an artificial reef. Monitoring the shipwreck’s area raises suspicions that efforts have been made to remove parts of the sunken vessel. 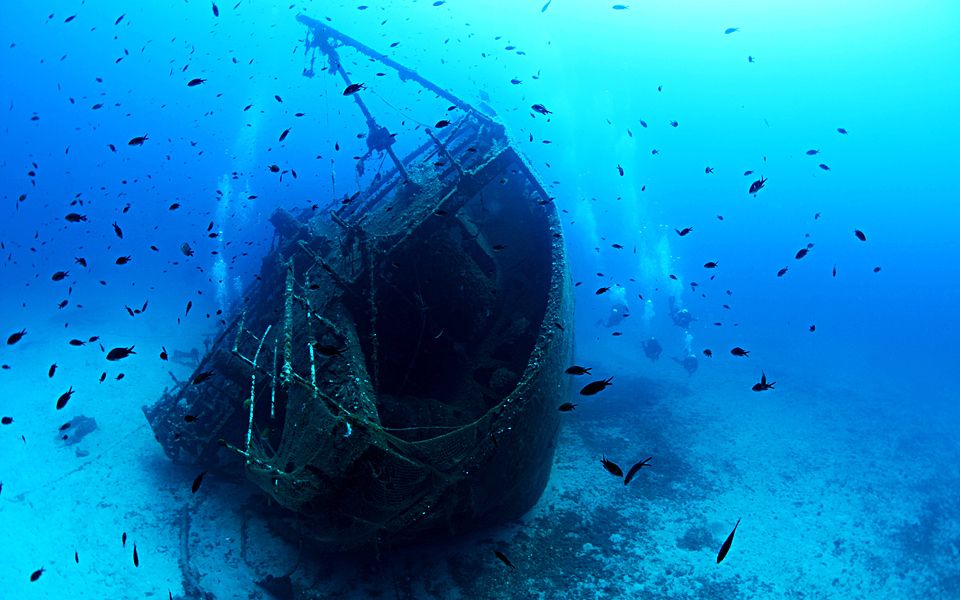 The wider Athens area’s best known shipwreck rests on the sandy seabed of the Saronic Gulf, directly opposite Sounio, off the southern side of the island of Patroklos. The freighter, Kyra Leni, draws divers of all levels, including beginners, as a result of its location in relatively shallow waters and the sandy seabed. The visibility is good and great pictures can be taken while exploring the bow (at a depth of 17meters) or stern (at a depth of 32meters). Small and big fish find refuge within the interior, but divers are most likely to be content with a look around the exterior. Penetration into the boat is limited, especially at the stern. 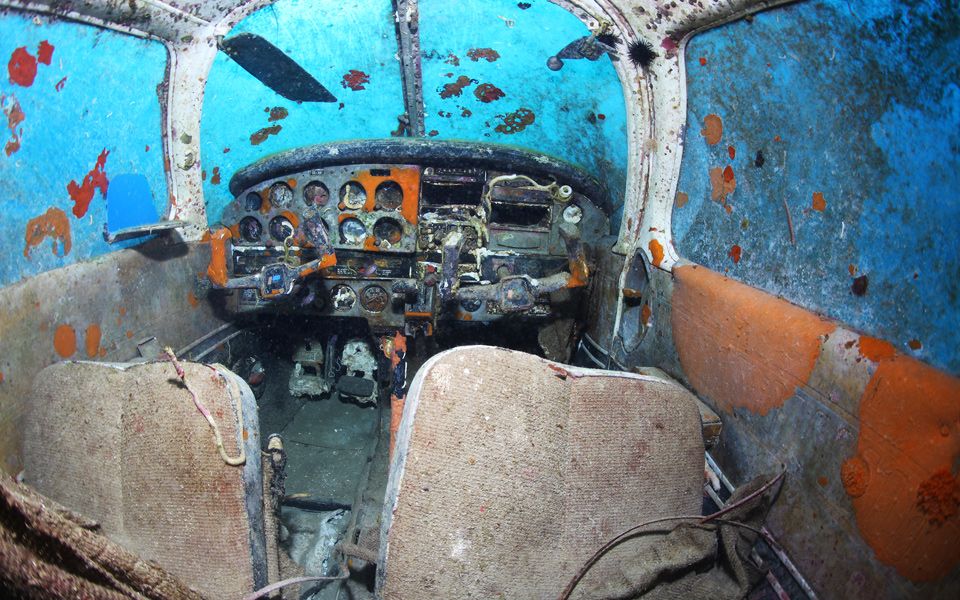 Even the flight book may be seen inside this sunken airplane.

Located by Marmaropetra bay at the northern end of Makronissos island at a depth of 18 metres, the sunken aircraft may be observed with just a simple mask. It went down on October 2, 1988 as a result of a fuel supply problem. A total of 28 years after this fatal flight, the aircraft’s features have remained intact. The cockpit and even the flight book of this four-seated single-engine aircraft may be seen. It can be easily approached and clear pictures of the aircraft’s interior may be taken.

Tip • The left back side of the aircraft still bears the words “Visit Greece”. 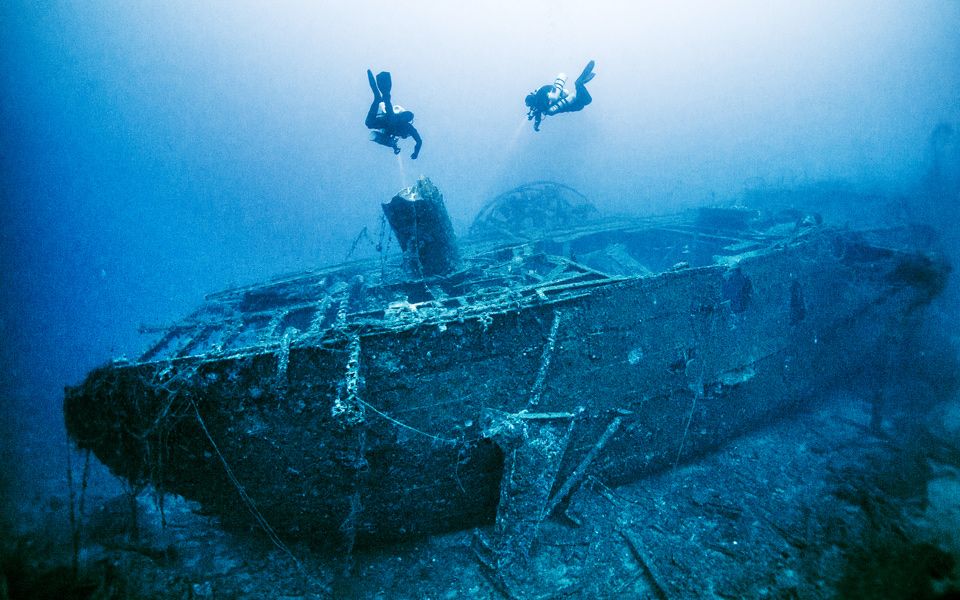 Diving here reveals one of the world’s most impressive shipwrecks even for the experienced divers.

Preserved in excellent condition, this shipwreck is impressive, even for experienced divers.

Patris (meaning homeland), a paddle steamer of exceptional shipbuilding design for its time, lies sunken off the southwestern part of Kea, a Cyclades island. Following a misjudgment by the captain on February 28, 1868, the boat slammed onto the reef at the island’s Koundouros bay. All  500 or so passengers on board were rescued. They were on their way from Piraeus port to the island of Syros. Diving here reveals one of the world’s most impressive shipwrecks. The steamer has been cut into two. The two pieces lie within short distance of each other. One part of the boat sits in shallow water (18 meters) and is easily accessible. Its other part, sitting deeper, at 35 meters, demands greater diving experience. While exploring the boat, also explore the marine life above the reef.

Tip • Only one of the steamer’s two paddle wheels may be seen. The other one was lifted and is nowadays located on Syros. 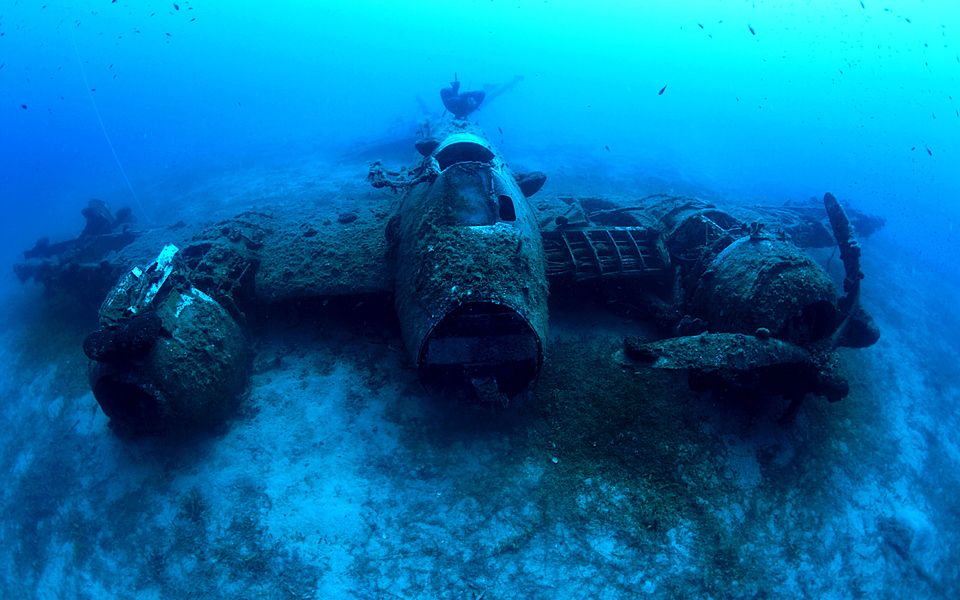 Sunk horizontally, almost as if the pilot landed the aircraft 34 meters underwater.

This Beaufighter model lies on the flat sandy seabed, half a mile off Cape Kouroupas at the Cyclades island Naxos. It is one of five to six such models that went down in the area during WW II. This specific Beaufighter most likely went down while its propeller was still rotating before sinking. Although planes are less durable underwater than ships, this specific aircraft remains in very good condition. Broken pieces may be seen scattered around the plane at a short distance.

Tip • Don’t expect to see skeletons. The crew on board was rescued. Its firing apparatus is still loaded with ammunition. 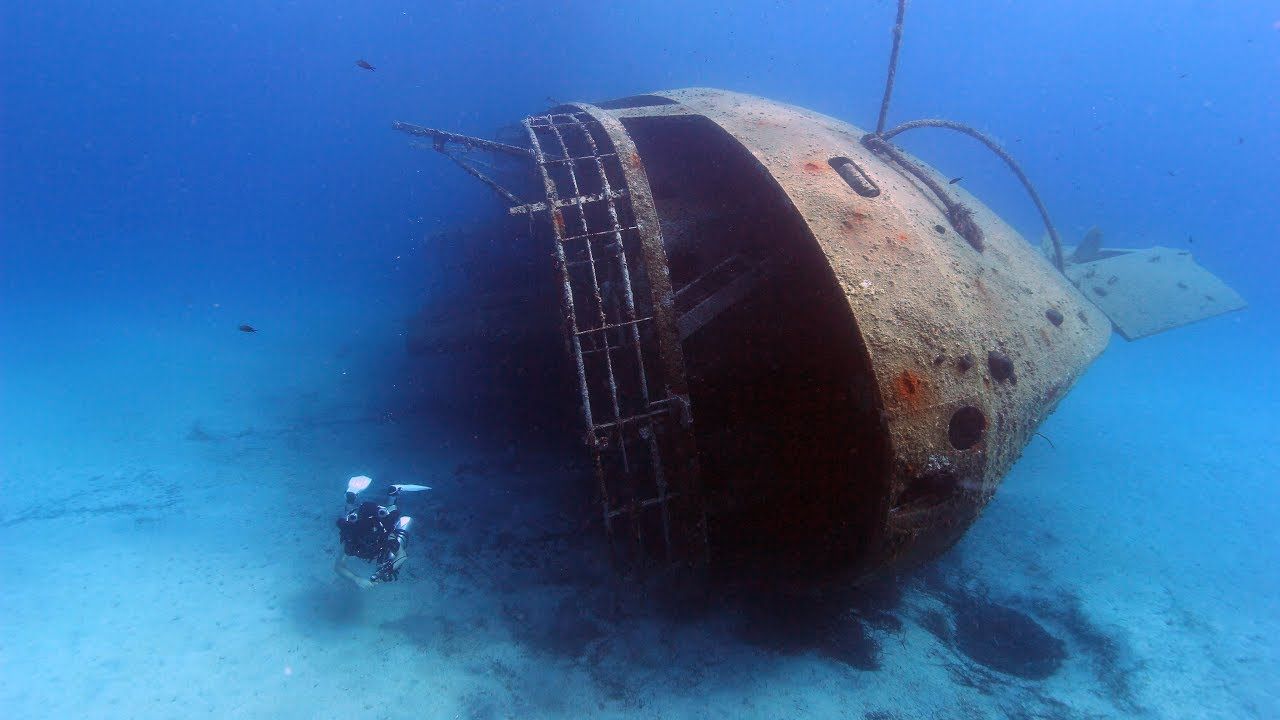 If you’re a diving beginner and love taking photographs, then this is the ideal wreck for you.

In Neapoli, Lakonia, southeast Peloponnese, 100 meters from the coast, lies the sunken Turkish freighter Kaptan Ismail Hakki with its stern turned towards the coast and  bow facing the ocean. It made its last voyage on January 30, 1978, carrying hundreds of tons of steel industry raw materials. This wreck is particularly popular among beginners as its depth ranges between 4 and 12 meters. Underwater photography enthusiasts will emerge having taken great snapshots. The white sand surrounding the wreck, combined with the shallow waters, create perfect lighting conditions for photography here. 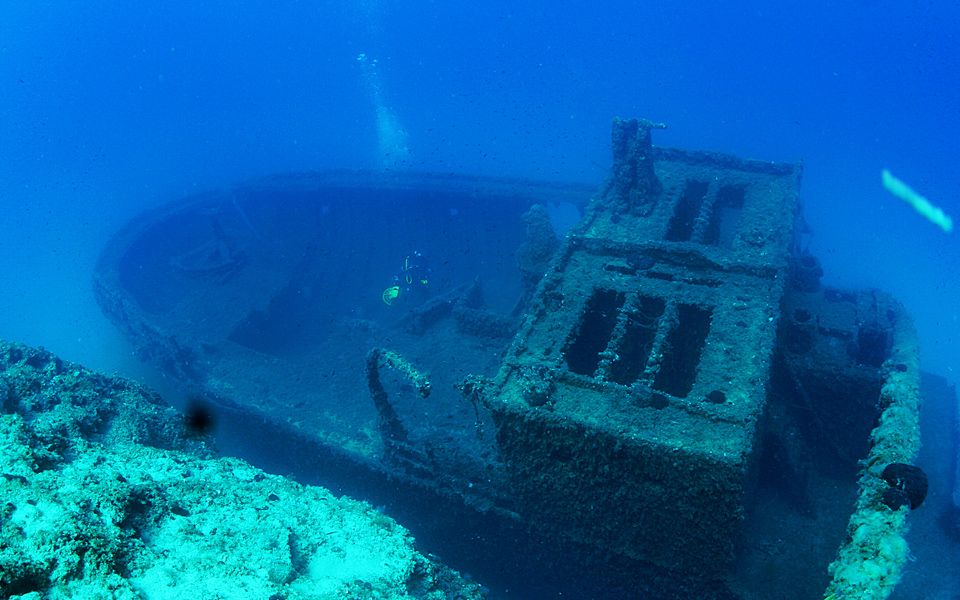 The greater part of this shipwreck has been saved and is visible from the water’s surface during the summer.

Divers looking for the Cassandra shipwreck follow a trail of scattered parts that lead from the shallow waters of the uninhabited islet of Platourada to the ship, which last sailed on February 28, 1973. The captain had left the control room and gone for dinner, leaving his assistant sailor at the wheel. Returning half an hour later, the captain was unable to avert the vessel’s crash onto the tiny rocky islet. Most of the ship is preserved. Its bow is missing. The sunken vessel is visible from the water’s surface in the summer. To reach it, divers must descend 20 meters. The wreck’s maximum depth reaches 32 meters. A narrow underwater corridor between the rock and shipwreck offers divers the opportunity to take mystery-filled photographs and also zoom in on sponges, anemones, as well as schools of fish that roam about the rock and the shipwreck’s keel.

Tip • Divers who have entered the shipwreck consider that it may be best penetrated from the engine room. 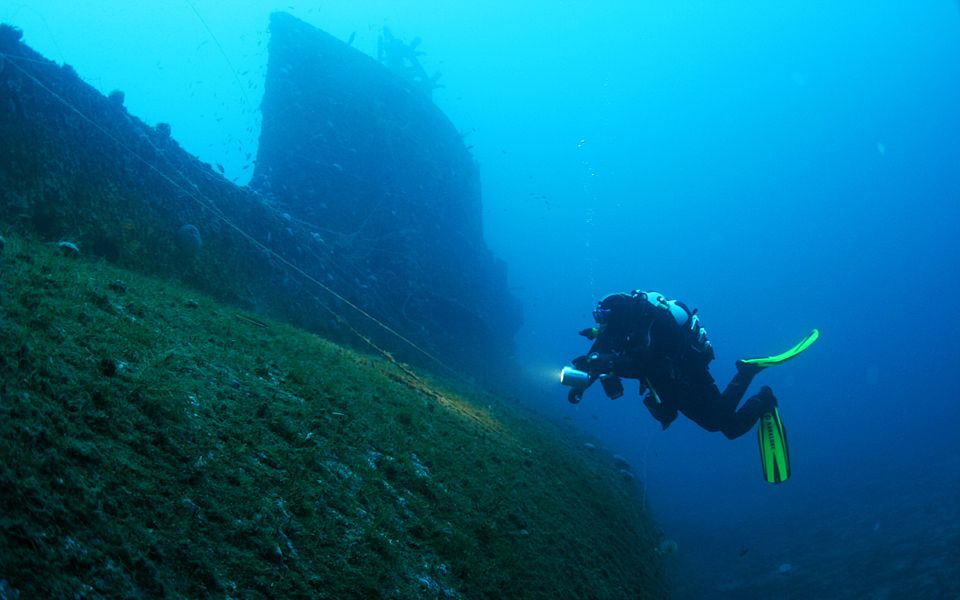 On December 6, 1941, the submarine Perseus, while floating on the sea surface off Cephalonia’s Katelios area, hit an Italian mine. The incident took the lives of 60 crew members. Until this wreck was discovered, nobody believed the accounts provided by English stoker John Capes, the tragedy’s sole survivor who managed to escape the sunken submarine. One of the first things experienced divers will see after having descended 38 meters is the submarine’s periscope bases. The wreck’s maximum depth reaches 52 meters. Divers who get this far will see the bow and torpedoes. The propellers and controls have been preserved exactly as they were in 1941. The steering wheel is turned to the right, the compasses indicate a course of 107 degrees, and the canon is still attached in front of the turret.

“I had spent almost one month looking for it and found it on my last dive, in 1997. It’s impressive, almost in its original condition,” remarked Thoktaridis, the professional diver and explorer of naval history, who  conducted extensive historical and marine research in order to locate this submarine.

Tip • The engine is set in a gear to run ahead at semi speed and the steering wheel is turned to the right, indicating that an effort was made to avoid hitting the mine. A two-meter crater may be seen at the bow. 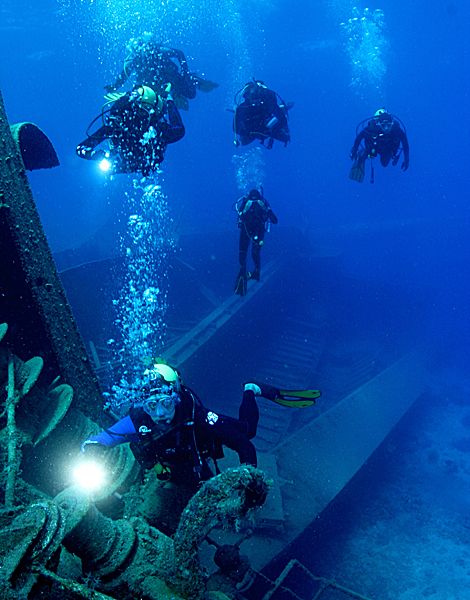 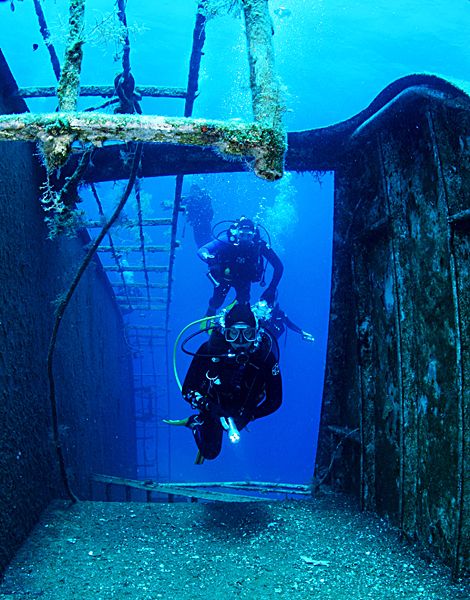 The Liberty vessel, measuring 69 eters in length has drawn the attention of divers as it remains in good condition. The bow may be explored with just a mask and snorkel.

The freighter Liberty, one of many legendary ships built in the USA during WW II, lies sunken just off Vathi bay on the small Dodecanese island of Pserimos. Diving is not necessary to explore this wreck, part of which may be spotted from a distance. Its cranes and a portion of the bow protrude from the water’s surface. Divers tie their dinghies to this exposed part, before diving to fully explore the vessel, measuring 69 meters in length. It sunk on January 26, 1997 after the captain lost control and sits at a depth of 24 meters. The vessel, which lies rolled over to its left side, has drawn the attention of divers as it remains in good condition.

Tip • If in the area, keep in mind that other wrecks exist off the tiny islet of Plati, next to Pserimos. Two German ships are located off Plati one off the northern side, the other off the southern coast.